At Heartpace we’ve written extensively on OKRs (in fact, here’s our whole series on OKRs) as well as Balanced Scorecards. But we’ve never thrown them both together into one article. Here we teach you all about OKR vs. Balanced Scorecard.

Learn how both work together, the main differences between the two, the advantages and disadvantages of both frameworks, and more!

OKR stands for Objectives & Key Results. Many say that OKRs are Silicon Valley’s “secret weapon” because the goal-setting structure was established and is now practised by large tech companies, including Intel, Google, Amazon, and more. Learn more about the definition of OKRs here.

According to Akram Tariq Khan, VP of Human Resources at YourLibaas, “OKRs are basically an approach to goal setting wherein we usually have a set of ambitious and qualitative objectives. These measures might be indirectly linked, though usually aren't, to a quantitative 'Key Results' which we intend to achieve.”

As OKRs have gained momentum and are frequently credited for the successes of large companies, there’s something else people have noticed: The OKR approach is structurally similar to the Balanced Scorecard (BSC) approach. Both aim to clearly define high-level strategic priorities in an organization.

Get an introduction to Heartpace OKR software here.

What is a Balanced Scorecard?

The Balanced Scorecard is an older framework that is tried and true and has a 20+ year history in workplaces. However, recently, it has come up against more competition from other frameworks.

Amie Devero, Managing Director at Beyond Better, says “the [Balanced Scorecard] map itself is built for the top to the bottom, and is executed by creating projects and initiatives that get done in the reverse order. In other words, while the financial goals are the ultimate aim, the causal relationships flow from the people, through the processes they create and execute, to deliver the value proposition to the people, and ultimately the financial metrics which indicate success (or failure).”

BSC is a strategic framework that sets out a company’s top priorities in four key areas: Finance, Customers, Internal Processes, and Learning and Growth. These areas are also known as “perspectives.” BSC is meant to help organization’s clarify and communicate their core objectives.

What are the main similarities and differences between OKRs and Balanced Scorecard?

For OKR vs. Balanced Scorecard, there are some key items both have in common:

Similarities between OKRs and Balanced Scorecard

Simplified, OKRs and Balanced Scorecards share much of the same DNA. Both are:

OKRs vs. Balanced Scorecard: the differences

Here are the biggest differences between the two goal-setting frameworks: 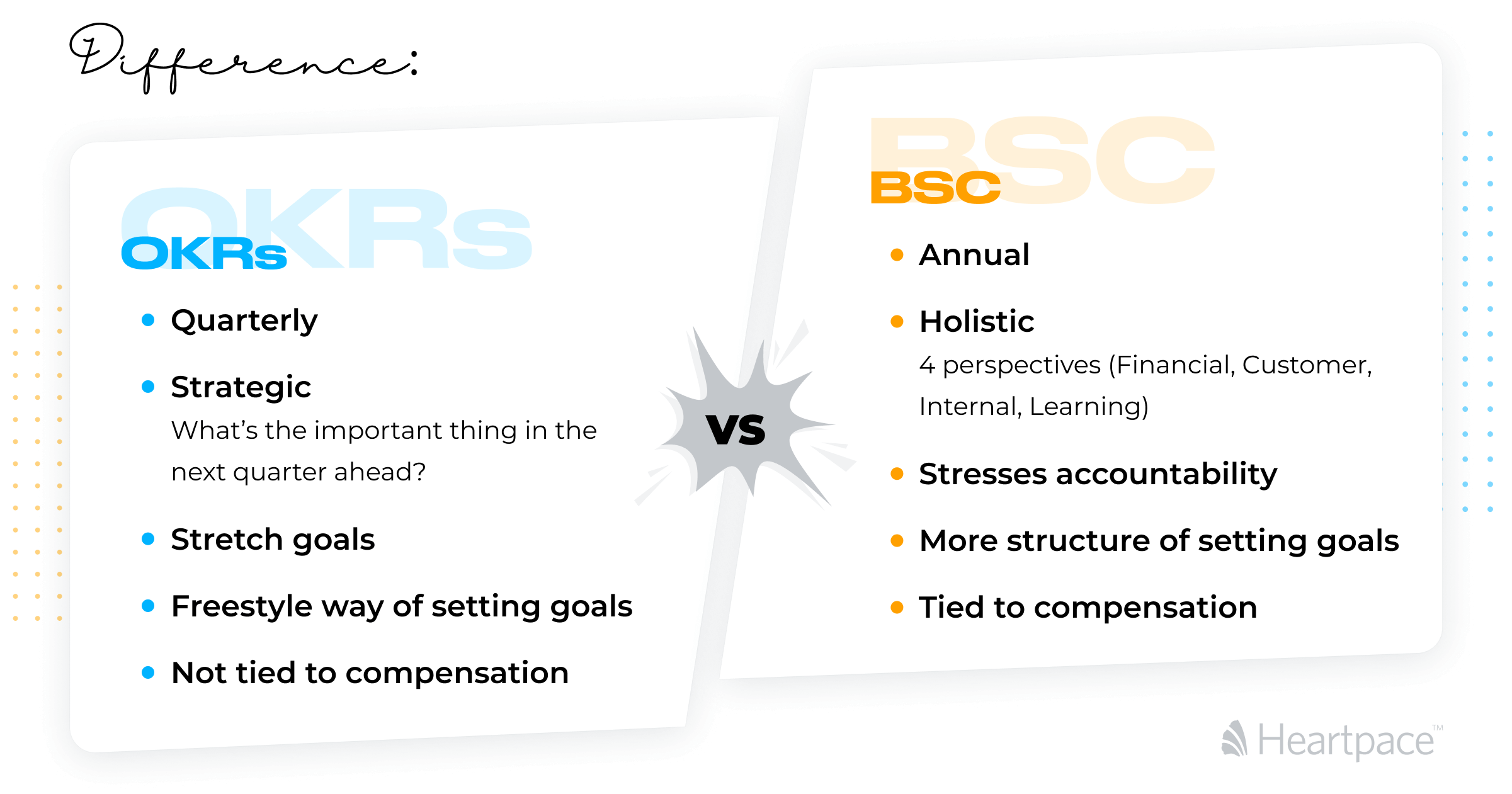 BSC are created with the intention of evaluating those goals for the period of about a year. OKRs have a more short-term focus, and are often renewed on a quarterly basis.

BSCs are focused on the four distinct perspectives we listed above, with objectives falling under one of those categories. OKRs have no such categories and simply focus on the items that are most important for a company in a given quarter.

Due to the nature of OKRs, With s BSC, it is often easier to have clarification around what success looks like. OKRs include “stretch goals” that companies aren’t expected to ever reach, but that help them be more ambitious in trying to achieve those goals than they would have otherwise. BSC simply states exactly what the expectation is, but doesn’t encourage teams to go ‘above and beyond.’

There is a lot more structure with BSC and goal-setting than with OKRs. OKRs are a more freestyle way of setting goals where teams and employees have more flexibility with deciding what to measure and changing goals as needed.

Every organization is different in how they go about implementing OKR vs BSC strategies. In most cases, BSC is tied to compensation and yearly wage growth whereas OKRs are neither related or tied to employee salary. This is seen as a benefit because it further encourages teams to not have a fear of failure.

Advantages & disadvantages of each methodology

Both OKRs and BSC bring value in their own way. It really depends on which framework works best for the organization.

OKRs have a shorter cadence, give employees more freedom, and help challenge them. They are also not tied to compensation, which can be both a positive and a negative thing. While they encourage more ambition in teams, it can also leave an employee feeling that they will never achieve enough.

BSC with its four perspectives provides immense benefits and helpful structure for organizations. However, they can be less flexible to work with and they have the potential to negatively impact salary.

Can OKRs and Balanced Scorecard work together?

As long as it is executed correctly and without any confusion for company members, OKRs and BSC can most definitely work together. In fact, each framework has something to learn from the other.

Todd Ramlin of Cable Compare says “the two systems can work well together. Combining a Strategy Map (a key part of the Balanced Scorecard system) with OKRs can help organizations gauge long-term execution success, and the Strategy Map can provide the road map.”

For example, OKRs can take from the BSC element of visualizing strategy. This could make the OKRs even better and lend more clarity to them.

Likewise, BSC could be integrated into a more flexible format, and changed up every quarter instead of just once a year. Things move fast in the world and it’s important that goal-setting frameworks evolve and keep up.

It is possible to combine the best of both experiences and build them to be more effective overall in obtaining company goals and objectives.

Turn great strategies into acheved results. Have one place to set and manage goals for the company, team, departments or individuals. Everyone will know where they are going and what the top priorities are.

Explore how it works

How To Conduct Effective Performance Appraisals And Reviews

A well-structured performance appraisal is critical in showing employees that they are an essential contributor and have a future within your company.